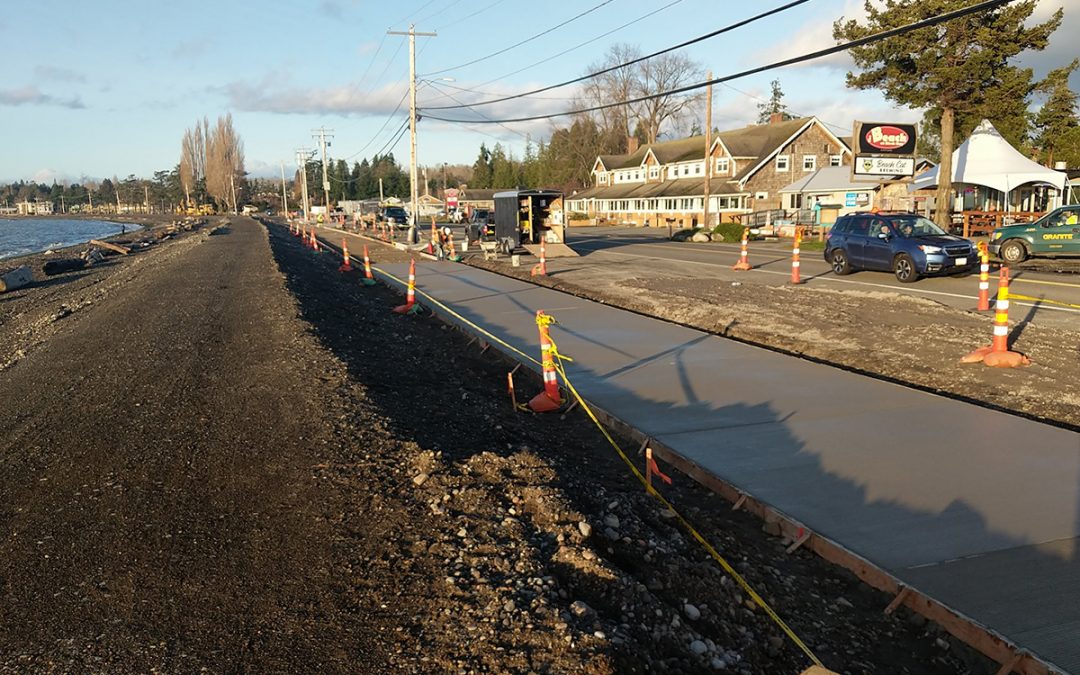 You may have heard that a berm has been built along the Birch Bay waterfront in northern Whatcom County to improve pedestrian safety and protect the community from water damage by high tides and storm surges. The new berm is an artificial ridge that stretches a mile and a half from the mouth of Terrell Creek north to Cedar Avenue along Birch Bay Drive.

Custom Concrete Contracting had an important role to play in that work, officially known as the Birch Bay Drive and Pedestrian Facility Project.

The majority of Custom Concrete’s work was to install several hundred feet of concrete sidewalks for use by walkers and joggers eager to enjoy walks along the beach.

The extra-wide sidewalks and curbs are designed to give pedestrians plenty of space to stroll while also keeping them safe from nearby traffic along Birch Bay Drive. Previously, anyone walking along the bay used a gravel path adjacent to the roadway or walked along the shoulder near passing traffic.

Because the new sidewalk is set back from the street, up against the edge of the berm, angled parking has been installed along the street, greatly improving vehicle access to the area.

The concrete sidewalk and curbs installed by our concrete flatwork crews blend with a crushed limestone path that continues along the waterfront. Along the berm, and in some cases between the path and the street, beach wildrye grass is gaining a foothold, preparing for its role in providing erosion control and beautifying the area.

Around the light and power poles that line the street along the new sidewalk, Custom Concrete’s flatwork team poured concrete curbs to create planting areas filled with native vegetation.

Construction on this project, which CCC completed as a concrete subcontractor of Granite Construction, began December 2019 and wrapped up in April 2021. Another gorgeous government concrete project is in the books!

For a great overview of this Birch Bay project, watch this video of Birch Bay resident Mike Price, president and engineering geologist with Entrada/San Juan, touring the site and explaining its many features. A timeline of the berm, going back thousands of years to when the Coast Salish people began visiting the area, is available online here.

More photos of this project: