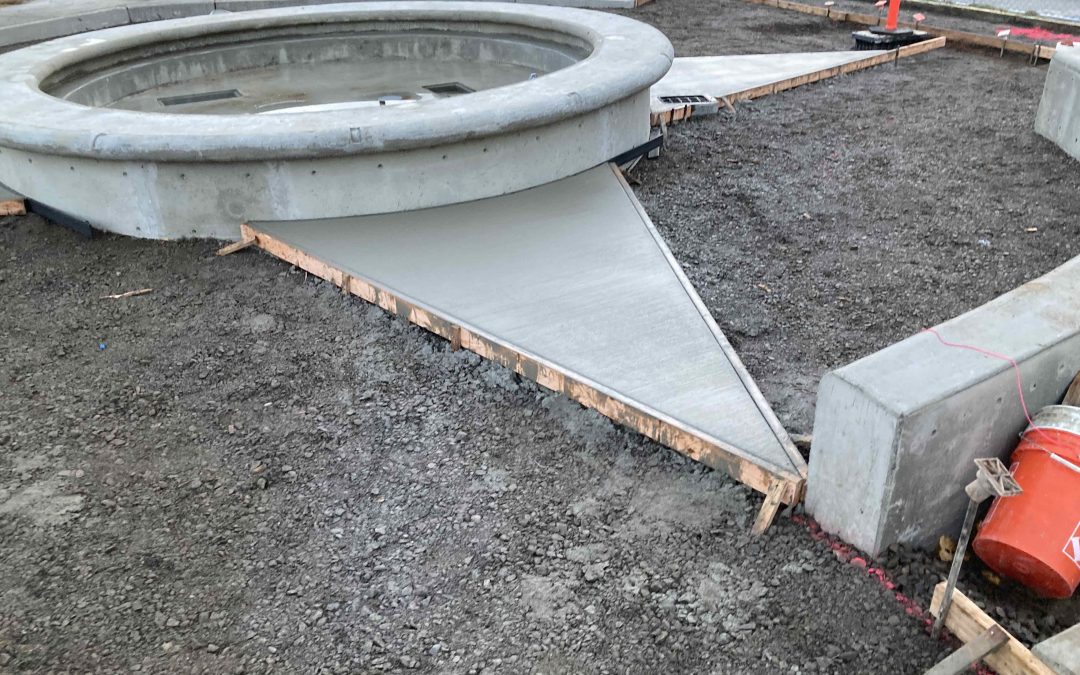 According to the City of Bellingham, Fountain Plaza once served as a watering hole for animals and livestock traveling through the area. Later, when streetcar lines were built, the plaza became the focal point of a new commercial area just north of downtown.

Today, the plaza sits at the leading edge of the Fountain District Urban Village, serving as a small but inviting oasis at the southern end of Meridian Street as it connects with Broadway, just north of Elizabeth and Fouts parks.

With the plaza in need of a refresh, Custom Concrete Contracting was hired to handle the concrete work on the plaza. Our tasks included recreating the concrete plaza in the shape of a compass rose, constructing a custom concrete circular fountain to replace the existing eye-shaped design, and install concrete benches and seating areas throughout the plaza.

The upgrade project was designed to help implement the goals of the Fountain District Urban Village Plan.

Working as a subcontractor for Tiger Construction on the City of Bellingham project, Custom Concrete started with a blank canvas, as all plants and objects — including the old fountain — were removed from the site, with the exception of an art installation that had previously been added to a light pole in the plaza.

The centerpiece of the plaza is the new fountain, so we started there, constructing a custom circular form, reinforced with rebar, for the new water feature. With its bullnosed edges and integrated seating, the fountain was a complicated project, but Custom Concrete’s flatwork experts were a good match for the job. Around the fountain, toward the outside edges of the plaza, Custom Concrete’s crews constructed three curved benches that look in toward the center of the park and its fountain focal point.

With those items in place, we could start pouring the compass rose pattern that was to be a signature element of the design. Surrounding the accent paving of the four compass elements, Custom Concrete poured intersecting concrete squares to fill out the rest of the surface of the plaza.

Much of the original sidewalk along Broadway was left intact, but Custom Concrete crews poured a new section of sidewalk along Meridian Street with small squares to match the previous design.

Overall, the new Fountain Plaza is a project the entire city can be proud of. At Custom Concrete, we certainly are proud of our concrete installation work and pleased to be able to contribute to the beautification of Bellingham and the preservation of its history.