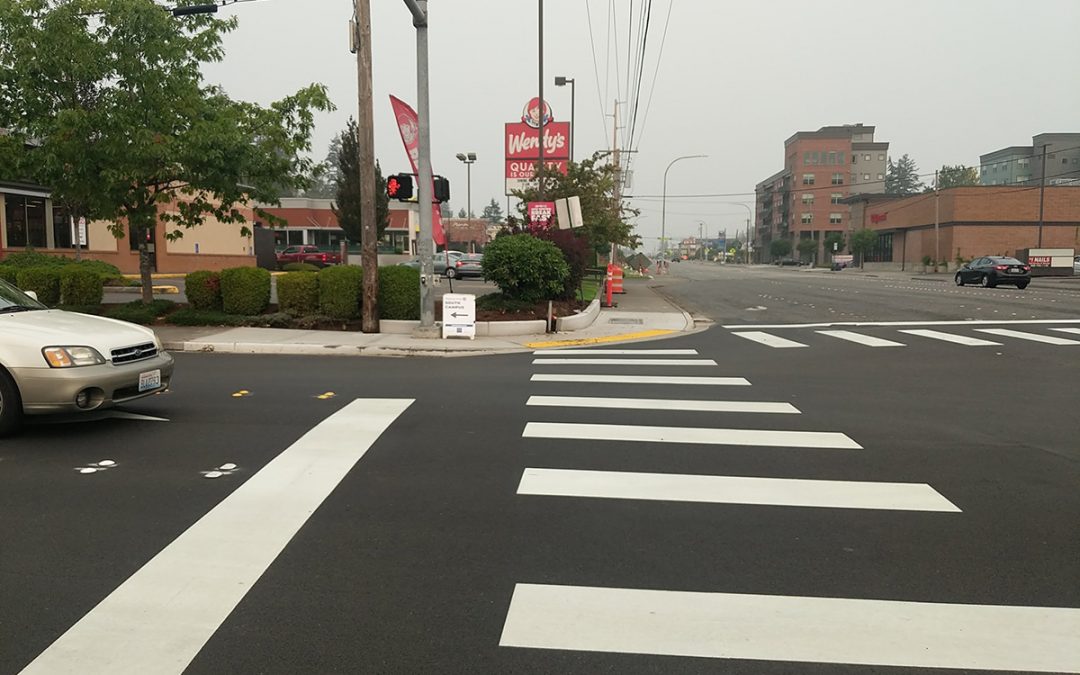 This summer and fall, Custom Concrete Contracting has been working with Colacurcio Brothers Construction Company to make major transportation improvements in Bellingham.

CCC has helped with needed traffic and pedestrian improvements to Samish Way, Maple Street and Ellis Street along the corridor that stretches from Bill McDonald Parkway to Lakeway Drive.

The work is part of  “road diet,” reducing the number of vehicle lanes while increasing pedestrian and bicycle safety. As described by the Samish Neighborhood Association, the overall project includes marked bike lanes, green “bike boxes” and, across Bill McDonald Parkway near the Sehome Haggen, a pedestrian-activated flashing crosswalk.

A green corridor down the center of the street will help provide safety for vehicle traffic, and a 5-foot buffer will separate the bicycle and vehicle lanes.

A major reason for this transportation work, according to the city, is that the roadway doesn’t need two lanes of vehicle capacity in each direction. These improvements are the result of a 2016–2017 study of potential improvements to the corridor. The updates are designed to “reduce collisions, construct bikeway facilities, improve pedestrian safety, and improve the streetscape environment.” In a report about the corridor study, the city notes that between 2012 and 2016, vehicles collided with pedestrians 11 times and bicyclists 7 times, with drivers’ failure to yield being the most common factor.

The city’s hope, according to the SNA, is that the area eventually will transition to “higher density development with a greater emphasis on walking, biking, and bus ridership, and less emphasis on automobile transportation.”

Also in the area, Custom Concrete is working on a related concrete construction project — again with Colacurcio Brothers — to improve Bill McDonald Parkway between 20th Street and Samish Way along the southern end of the Western Washington University campus. The main aim of that project has been to improve the driving surface and provide better access for people with disabilities.

As part of our involvement on both government concrete projects, Custom Concrete installed concrete curbs, gutters and sidewalks along Samish, Maple, Ellis and Bill McDonald. We also poured colored concrete into the new median and stamped it to resemble a brick pattern. Trees eventually will be planted in that median as well.

Here at Custom Concrete Contracting, we love being involved in government construction projects that help beautify our Whatcom County community and help improve safety for everyone. To learn more about CCC’s work on similar road and transportation projects, including work we did recently to widen College Way in Mount Vernon, visit us at https://www.customconcrete.biz/.