How to create concrete steps 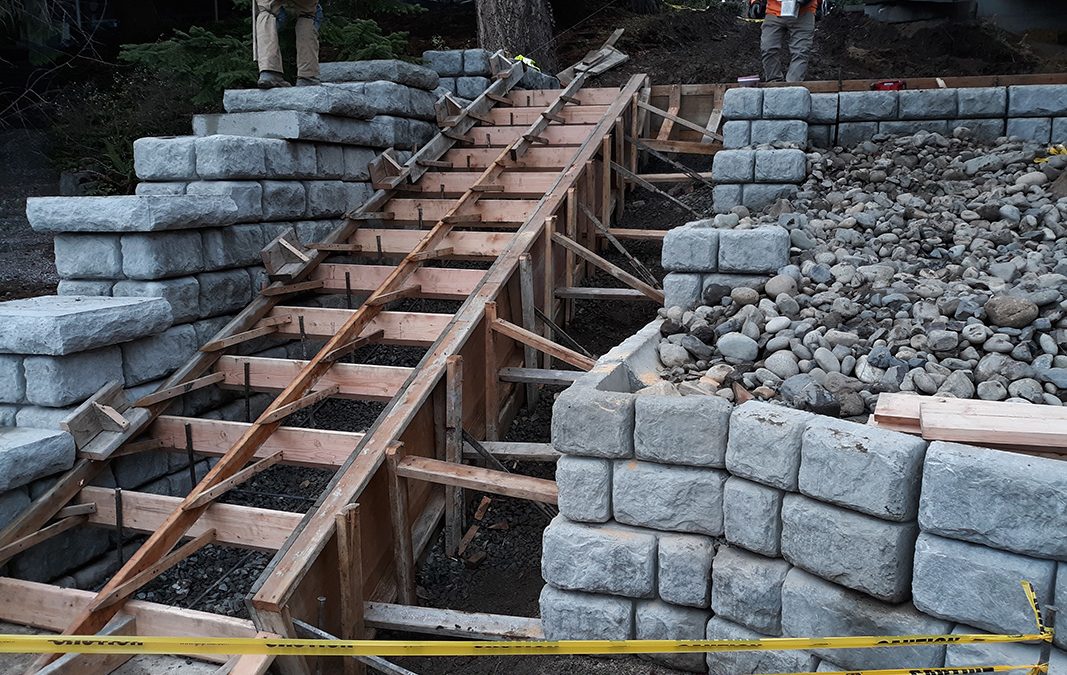 Ever wonder how concrete steps are created?

Custom Concrete Contracting crews recently completed a large set of concrete stairs here in Whatcom County, and the project is instructive for sharing the process.

Here are the basics of how to build concrete stairs:

Prepare the grade. For this project, Custom Concrete’s crews used crushed rock, spread across the hillside underneath the location of the steps. Concrete steps require the installation of rebar to reinforce the project, so the subgrade isn’t as critical as it is in other concrete applications. However, it’s important to remember that the distance between the subgrade and the lowest portion of each step (the section where the top of each step, or tread, meets the face of the step above it, or riser) must be at least 6 inches. This is to ensure that the concrete remains sufficiently strong, even at its weakest point.

Build the forms. The concrete steps in this project were butting up against a wall made of concrete bricks on one side, so we needed to build a form sidewall only down one side of the steps. Wooden riser boards are installed between the two sides to form the concrete into stair steps during the pour. These riser boards form the front of each step. You’ll notice that the bottom of each riser board is cut at a 45-degree angle; this is to allow for the finishing of the top of the stair below while the form boards are still in place. Without this angle cut, you’d end up with an unfinished inch-and-a-half section of each stair tread when the form is taken apart. Stringers are installed from top to bottom, attached to each riser, to keep the forms from bowing when concrete is poured. Braces also are installed to keep the side of the form in place. Note: To texture to the steps, you may want to consider using polyurethane step form liners.

Install the rebar. As mentioned above, concrete steps must have rebar installed to reinforce the structure. As you can see here, these steps are reinforced with a lattice of rebar that also ties into the concrete sidewalk at the top of the steps, helping to hold all of it together.

The end result is a beautiful set of concrete stairs that will look good and last decades into the future.