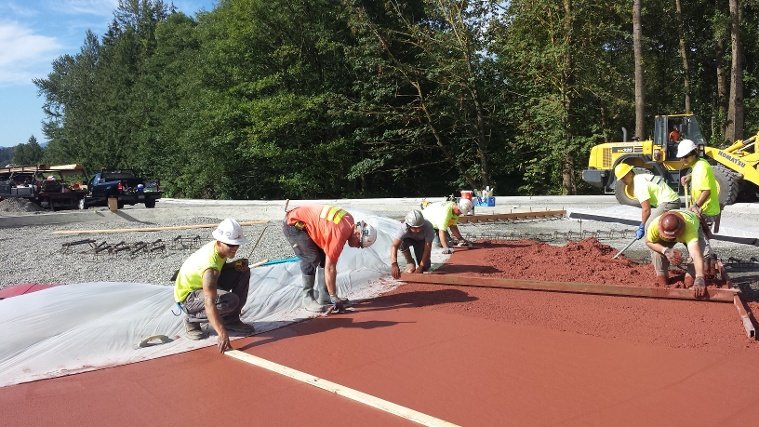 This summer, drivers on Whidbey Island in Island County began using a new roundabout at the intersection of State Route 20, Banta Road and Northgate Drive. Custom Concrete, a Whatcom County concrete company with a long history of traffic circle construction in the Pacific Northwest, played an important role in this roundabout project, which was completed for the Washington State Department of Transportation.

Working as a subcontractor for Oak Harbor’s SRV Construction, crewmembers from Custom Concrete helped work through the many tasks on the roundabout project on an accelerated timeline. Excavation for the project began on June 6, with the roundabout opening for traffic on June 23 — 10 days ahead of schedule.

On this important highway construction project, Custom Concrete was responsible for concrete paving, concrete finishing, reinforcing rod, bar, mesh, sealing, curb and gutter construction. As in similar projects, the outer portion of the central island on this roundabout features colored concrete stamped with a brick pavement pattern. That pattern also extends to the “splitter islands,” which divide the traffic as cars approach the roundabout and which provide a place for pedestrians to pause as they cross the street.

Check out the WSDOT YouTube page
for a neat timelapse video of the construction.

According to the state DOT, a roundabout was necessary in this location for safety reasons. Since 2011, 26 crashes have been responded to by law enforcement at this intersection, with half of them involving vehicles trying to turn onto SR20 from side roads.

According to information from the Insurance Institute for Highway Safety, there are 75 percent fewer injury crashes and 90 percent fewer fatality collisions at intersections where roundabouts have been installed. Not only does this SR20 roundabout make it easier for vehicles to turn onto the highway, but it also provides a simple U-turn option for people who live to the north and south of the roundabout. The availability of an option for U-turns may limit the number of left turns onto the busy highway, according to the state DOT.

For photos of this project, check out the
WSDOT Flickr album showing the construction progress.

Additionally, the roundabout — with its built-in “splitter island” pedestrian areas — provides a safer option for those on foot to cross the road to bus stops or other destinations along the road or nearby.

Not sure how to drive a roundabout?
Check out this explanatory video series from WSDOT.

When the state DOT comes calling, Custom Concrete is proud to help out on projects that improve safety and traffic flow in the Pacific Northwest — from Whatcom County all the way down to Island County. Learn more about Custom Concrete’s experience with government contracting.